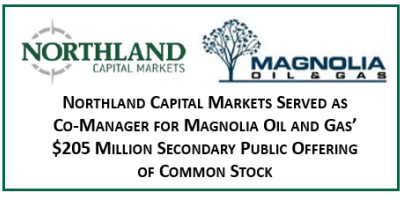 Northland Capital Markets announced today that it has acted as Co-Manager for a secondary public offering of approximately $205 million of common stock for Magnolia Oil and Gas Corporation (“Magnolia” or the “Company”). Magnolia is an independent oil and natural gas company engaged in the acquisition, development, exploration, and production of oil, natural gas, and natural gas liquid reserves. The Company’s core oil and natural gas properties are located in Karnes County and the Giddings area in South Texas, where the Company primarily targets the Eagle Ford Shale and the Austin Chalk formations.

The Company priced the sale of 19,550,000 common shares to the public at $10.50 per share for gross proceeds of approximately $205 million, which includes 2,550,000 shares from the over-allotment option fully exercised by the underwriters.

Magnolia will not receive any of the proceeds from the sale of its common stock by the selling shareholders.