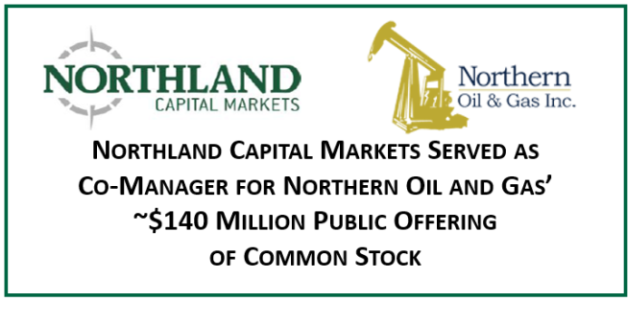 Northland Capital Markets announced today that it has acted as Co-Manager for a public offering of approximately $140 million of common stock for Northern Oil and Gas, Inc. (the “Company”).  Northern Oil and Gas is an independent energy company engaged in the acquisition, exploration, development, and production of oil and natural gas properties, primarily in the Bakken and Three Forks formations within the Williston Basin in North Dakota and Montana.

The Company priced the sale of 14,375,000 common shares to the public at $9.75 per share for gross proceeds of approximately $140 million, which includes 1,875,000 shares from the over-allotment option exercised by the underwriters.

Northern Oil and Gas intends to use the net proceeds from the offering, along with the proceeds from the concurrent Senior Notes offering, to complete a transformational acquisition of non-operated natural gas assets in the Appalachian Basin from Reliance Marcellus LLC, as well as the early redemption of the Company’s 2nd Lien Notes.